The Great Valley Hotel, built about 1838, was also known through the years as the Plank Road House by Able Hicks, the Halfway House on the northern stagecoach route, The Fenton Hotel, and The Harrison House.  In 1926, Minnie Taylor bought and remodeled the house and it became known  as The Evergreen Tea Room. The restaurant was a popular spot for bridge clubs, school reunions, bridal showers and wedding parties.   Specialties included steaks, fried chicken, roast pork, several side dishes and pastries and pies of all kinds. In 1946 all specialties were $1.50 a plate!  By the 1950's, the house was owned by Minnie's son Robert and wife Charlotte. They lived in and ran the house as "Taylor's Tourist Home".  The house was open to hunters in the fall, serving a hearty breakfast. When the ski industry developed, a need for housing in the early 1960's arose, the Taylor's opened the home for seasonal rentals. As their daughters grew and left home, there were more rooms to rent out. They continued hosting guests until the mid 1990's.  In 2006 the youngest child, Judy, and her husband Jeff, bought the house. They remodeled updating the plumbing, wiring, kitchen, windows, doors and insulation, and adding private baths with each bedroom, while keeping the feel of the age of the house, but providing safety and comfort.

May 16, 2008 was the official opening of the Bed and Breakfast, now known officially as "The Evergreen Tea Room and Guest House". 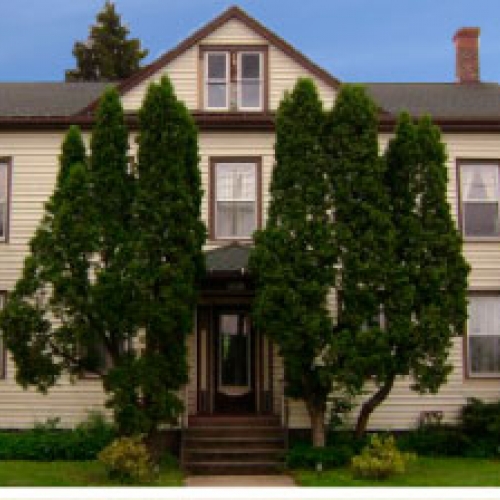 Evergreen Tea Room and Guest House is categorized in

Building made of Extinct Wood

The cabin at Pfeiffer Nature Center is made entirely of American Chestnut, which is now extinct.