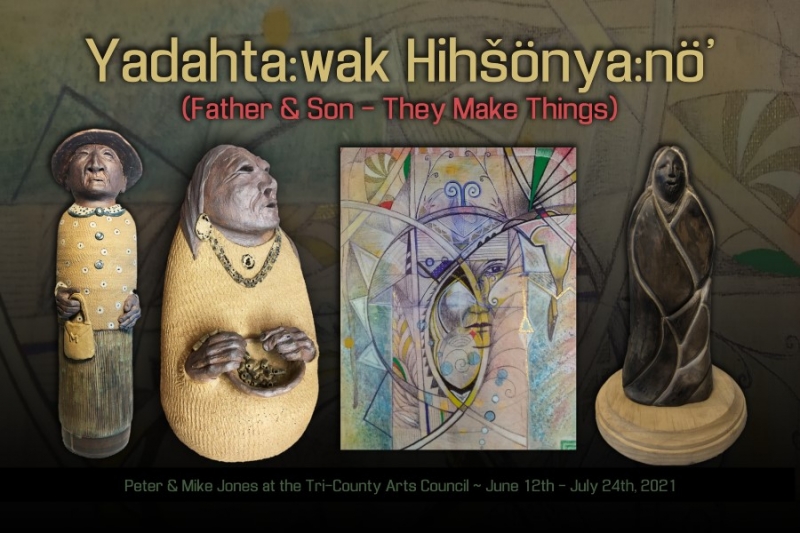 An Artist Talk and Reception will be held from 5 – 9 p.m., Saturday, June 12. Reservations are required for this event and are at https://rb.gy/hmyclx. Masks are required unless proof of vaccination is shown.

The work of both artists reflects their Native American heritage and issues that have impacted the Hodinöhsö:ni’ or “People of the Long House.”

Peter is an internationally renowned potter and sculptor who works mostly in stoneware and white earthenware clay. He resides on the Allegany Territory of the Seneca Nation of Indians. Peter studied under the Hopi artist Otellie Loloma while attending the Institute of American Indian Art in New Mexico. His pottery, some of which is derived from traditional Iroquois pit firing, hand-built coiling, and slab construction, is admired, and collected by community members, Native American art collectors, and museums across the country and internationally.

His work is “neo-traditional,” which is a modern interpretation of pre-colonization Iroquois pottery.

“Our traditional pottery died out around the 1500’s,” he said, adding “the transition to European kettles and metal pans replaced our early pottery.

“In 1977 I began researching our pottery to find out how it was made and what they were used for. Now, I think I have come to a pretty fair representation of the methods used by our ancestors in making pottery. After re-introducing this style of pottery back to our own people I began to wonder what our pottery might look like today had we continued to produce our pottery.”

His work is in private and public collections world-wide, including the Smithsonian National Museum of the American Indian, Heard Museum, Iroquois Indian Museum in Howes Cave, NY.

Mike is renowned in his own right for his paintings and sculpture. His work reflects his deep respect for his Onondaga and Seneca artistic heritage, learned as a boy from his father.

“I began working in clay at a very young age under the guidance of my father Peter Jones who taught me how to hand-build Iroquois pottery,” he said. “Since the original pottery died out around the 1500's, my father and I were some of the first ones to revive this art form.”

“I am primarily self-taught in regard to my drawings and paintings and am influenced by a diverse set of painters and illustrators - Native and Non-native alike - such as: TC Cannon, Dan Namingha, Earl Biss, MC Escher, Gustav Klimt, Jackson Pollock and Salvatore Dali.”

In addition to his father, Peter, Mike gives credit to several Native sculptors who include Tom Huff, Stan Hill, and Allan Houser who have influenced his clay sculpture.

His inspiration stems from a diverse set of Native and Non-Native artists such as T.C. Cannon, Dan Namingha, Earl Bliss, M.C. Escher, and Gustav Klimt, among others. Mike’s work is in collections nationwide, including the Heard Museum, the Iroquois Indian Museum, and the Indian Arts and Crafts Board.

Only East West Route that connects Canada with Mexico

Rt. 62 is the only east-west route that connects Canada with Mexico.

With its origin at Niagara Falls and end at El Paso, Texas, parts of the road follow the Ozark Trail.

Rt. 62 begins in Cattaraugus County in the Village of Gowanda and travels south through Dayton, Leon and Conewango (through Amish country) before heading west into Chautauqua County.