Although a convenience store for campers existed from the beginnings of Allegany State Park in 1921, the building now housing the Old Quaker Store Museum did not. A small souvenir shop and museum, located nearby, was operated from 1923 to 1930 by Edwin Countryman, the most colorful of the early entrepreneurs. Hamilton Ward, chairman of the Allegany State Park Commission, made a motion at the April 12, 1924 meeting that the Commission establish two stores and a restaurant for the camping public. The matter was referred to Parks Commissioner, John B. McCabe. Approval for construction of this building came at the February 1925 commission meeting. The building was erected during the spring of 1925 at a cost of $4,873.33, and opened on Saturday, June 13, 1925.

The Larkin Company of Buffalo became the park's storekeeper, with Albert Coe of Salamanca as manager. The Larkin Company operated the store for nine of the next 11 years. John Holt, of Quaker Bridge, had the concession in 1930 and 1931. The Quaker Store was operated until 1986 by a succession of concessionaires.  During the 60 years of its operation it supplied groceries, camping supplies and souvenirs, and functioned as a meeting place of friends. New life for the Quaker store began in 1995 with a proposal to develop most of the building as a visitor center and museum focusing on the history and development of Allegany State Park.

The Old Quaker Store Museum began its first season on July 30, 1996. the 75th Anniversary of the park's opening. A temporary exhibit was featured which outlined the steps in the establishment of Allegany State Park and highlighted the people involved in this venture. The Museum, with the permanent exhibit in place, was dedicated on October 1, 1997 in honor of New York State Senator, Jess J. Present. 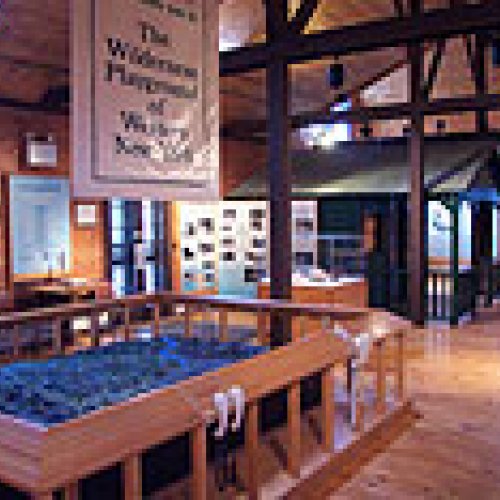