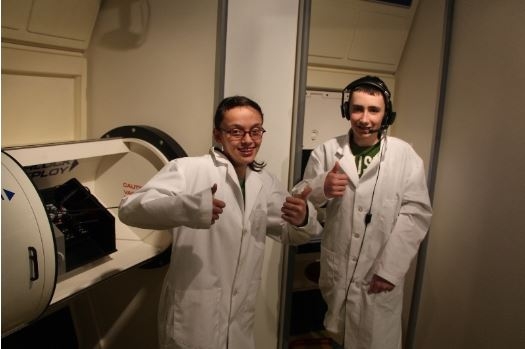 The Dresser-Rand Challenger Learning Center welcomed it's 10,000th Visitor on March 20th, 2014.  Appropriately so, a group of 8 grade students from Cuba-Rushford Central School topped the incredible mark and received a celebration complete with balloons and camera flashes.

So what is this Challenger Center and what's it like?

Fulfill that childhood dream of going off into space without going through the horrendous pre-flight testing and training!  This educational facility that was originally inspired in 2002, then with six years of planning and preparation, the first simulated launch took off in June 2009.  Since then, 10,000 visitors have walked through the doors, leaving the Earth behind.

Once there, prepared to be split up into one of eight teams, each with their own mission or challenge to overcome for a safe return home.  During the mission, you must accomplish specific tasks in order for the mission to be a success. Some of these tasks may be to build space probes, monitor life support functions, conduct experiments on items taken from the surfaces of Mars, and plot navigation courses for the spacecraft.  You will be working with Mission Control to coordinate these tasks.

Or travel to Mars in the year 2076, changing command from one mission control to another and launching probes to Mars moons for gathering information.  Join in studying Halley's Comet by being transported to a spacecraft 250 out of Earth's orbit.  Look for, launch probes, and then return with data.

These are just three of the otherworldy happenings you can embark on at the Challenger Center.  If you haven't gone yet, what are you waiting for?  Keep an eye out for specials events for adults as well!