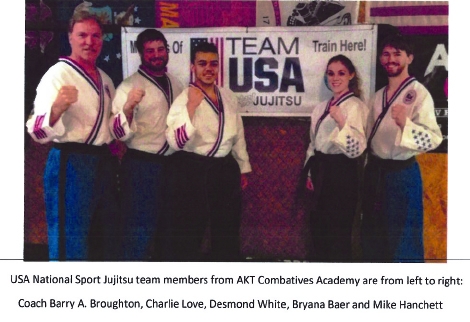 Team AKT Members Earn Spots on TEAM USA
Five members of Team AKT from Olean's AKT Combatives Academy recently received Official Notification Letters of their selection as members of the USA National Sport Jujitsu team that will be competing at the World Championships in Australia in October of this year.

For the past four years members of Team AKT have competed in US Sport Jujitsu Association, AJL and Jujitsu America sanctioned tournaments throughout the country. A series of tryouts in Virginia and Columbus, OH have yielded the National Jujitsu team that will be representing the USA at the World Council of Jujitsu Organization's (WCJJO) World Championships being held on the Gold Coast of Queensland, Australia. The WCJJO has 32 member countries that are eligible to send teams to the world championships held October 26th-29th, 2017.

"I cannot express how proud I am of these four individuals as they represent not only the USA, but also Olean and Western NY. Their hard work, dedication and perseverance has caused them to excel and reap great dividends," commented Grandmaster Broughton. "However, it would not be possible for them, if it were not for the assistance of fellow Team AKT members, the coaches and the support of their families," he continued. "When we formed Team AKT four years ago, my goal was to provide an opportunity for my students to test their acquired skills against world-class competitors, and to experience the comradery that is built between martial artists competing at national and international levels." The Sport Jujitsu format of competition most closely represented what students are taught at AKT Combatives Academies. Sport Jujitsu bouts consist of two 2-minute rounds of fast paced continuous sparring where competitors earn points for strikes, kicks, throws, takedowns, and submissions by chokes and joint locks.

"Athletes are selected based on their demonstrated abilities in previous competitions, being coachable and their attitude" said Stines, Team USA Head Coach. Team USA will field a team of up to 20 Sport Jujitsu fighters and 20 grapplers, 4 coaches, 1 team physician and 1 team trainer.

"Being selected for Team USA has been a huge eyeopener on what you can accomplish with hard work, and your willingness to take risks," states Desmond White. Mike Hanchett echoes the sentiment, saying "It's a surreal feeling to represent the USA and AKT Combatives. It's proof that if you have the right mindset and the proper work ethic, you can achieve your dreams.  Being from a small town doesn't mean that opportunities don't exist. You just have to be willing to take the leap."

Team USA members will be participating in monthly training camps in OH, NY, VA and TN throughout the year in preparation for the world championships. One of the Team USA training events will take place in conjunction with the 3rd Annual AKT Sport Jujitsu Classic tournament being held in Olean on April 22nd.

Team member Bryana Baer states, "This is a feat I would not have imagined in my lifetime. I am so grateful for this opportunity." Charlie Love agrees. "Earning a place on Team USA has been very humbling. It's a tremendous honor to represent AKT, our instructor, our families, and our country. We are all representing something much bigger than ourselves."

Because members of Team USA are amateur athletes and coaches, they are responsible for the financial obligations incurred with training and competing at the world championships. Expenses include air fare, lodging, ground travel, meals, and training gear. To assist in offsetting the nearly $20,000 needed by the five local team members, a fund raising campaign will begin this week. A fundraising team lead by Jess McFall will be seeking individual, corporate and civic sponsors as well as coordinating fundraising events
over the next several months. If you would like to make a donation, Mr. McFall can be contacted at (716) 904-2653. The Greater Olean Area Chamber of Commerce is also assisting in fundraising efforts. A GoFundMe Campaign has also been set up at www.gofundme.com/AKT-TeamUSA.

More information about the WCJJO World Championships can be found at www.wcjjo.org.  To contact AKT Combatives Academy, please call 716-373-1050, visit them at 705 N. Union St. Olean NY, 14760 or email them at info [at] AKTCombatives [dot] com

Griffis Sculpture Park is located on over 400 acres and holds over 250 sculptures.