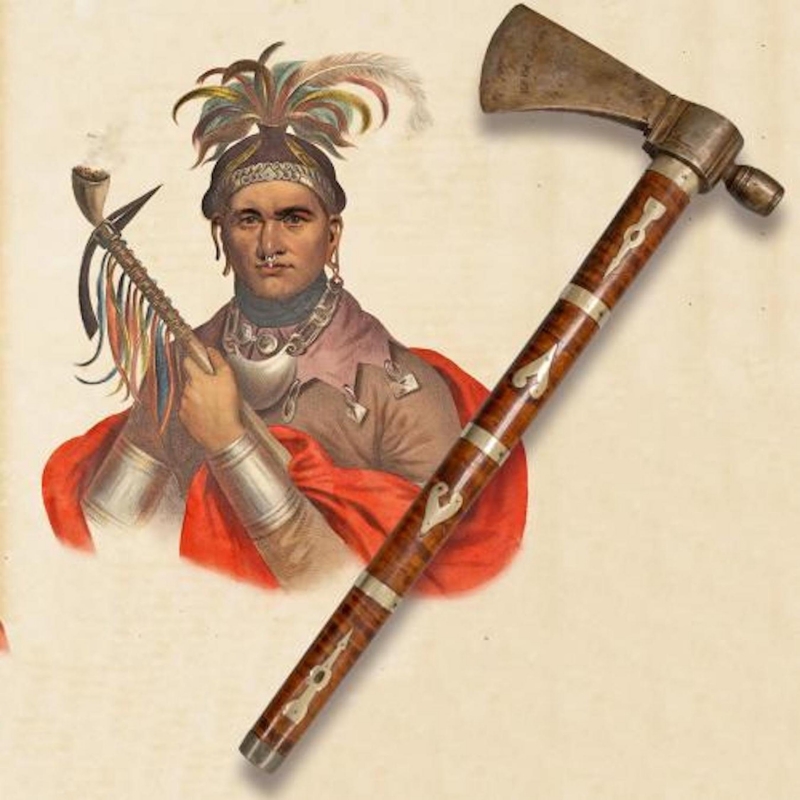 227 YEARS LATER, CHIEF CORNPLANTER’S PEACE PIPE-TOMAHAWK RETURNED TO SENECA NATION OF INDIANS.
George Washington gave this priceless relic to Seneca Chief Cornplanter in 1792, and then it was stolen from the New York State Museum, disappearing for decades.  Few items in American history symbolize the troubled relationship between the United States and Native Americans more than Seneca Chief Cornplanter’s peace pipe-tomahawk. Presented to the Chief in 1792 by President George Washington with hopes to end years of battle, murder and crimes, Cornplanter’s peace pipe-tomahawk soon took a strange journey akin to Native rights and treaties. On March 14, 2019, Chief Cornplanter’s peace pipe-tomahawk is officially returned to the Seneca Nation of Indians, taking an overdue place in the new Seneca- Iroquois National Museum in Salamanca, New York, on the Allegany Indian Reservation.

“The return of Cornplanter’s pipe-tomahawk to our new Cultural Center is truly a historic moment.” says Rickey Armstrong, President of the Seneca Nation of Indians. Noting that the new Seneca-Iroquois National Museum is both a place for important artifacts, as well as a cultural center to show that Native Americans still live and thrive in the United States, the ongoing role of Natives in American history is forefront. The Seneca Nation of Indians opened the $20 million, 33,000 square foot museum and cultural center in late 2018, and now important Native items have a home to be returned, preserved in the facility’s cutting-edge “clean room,” then displayed and honored. “This peace pipe-tomahawk signifies the relationship between two governments.” explains David Jr. George-Shongo, Director of the Seneca-Iroquois National Museum. “This is the reason it is displayed in our Agwas tiadiya’dade’ or our ‘Distinct Community’ room. The only Seneca word I can think about the peace pipe-tomahawk being in this room is ‘gáíwagwáihsös’ which means ‘It proves it.’”

The fact that President Washington’s gift to Chief Cornplanter was both a peace pipe and a tomahawk highlights this critical moment in American history. The two leaders were fierce foes for decades, both veterans of the French and Indian War, then the Revolutionary War. As a young British soldier, Washington earned the nickname “Town Destroyer” among the Seneca for brutal campaigns fighting the Seneca and other Iroquois Confederacy of Indians nations, who allied with the French. Then, during the Revolutionary War, General Washington fulfilled his negative nickname among Natives by ordering the Sullivan Expedition in 1779, with the goal of “taking the war home to the enemy to break their morale.” At least 40 Iroquois villages were destroyed, untold numbers of Natives killed, and precious stores of food burned. This brutal military campaign forced many Natives to rethink their allegiance to England, and splintered the unified strength of the Iroquois Confederacy.

Cornplanter quickly became a key leader and an eloquent voice for his people, as a Seneca war chief and diplomat negotiating with the newly formed United States of America. Chief Cornplanter and President Washington struggled to keep the peace, with states and white settlers trying to take advantage of Natives, ignoring land claims and instigating deadly skirmishes. Cornplanter was a signee of the Treaty of Fort Stanwix in 1784, yet deeply troubled by continued crimes against his people. In 1790, Cornplanter wrote to George Washington: “Father, You have said we were in your hand, and that by closing it, you could crush us to nothing. Are you determined to crush us?”

That December, Washington replied: “…it is my desire, and the desire of the United States that all the miseries of the late war should be forgotten and buried forever. That in future, the United States and the six nations should be truly brothers, promoting each other’s prosperity by acts of mutual justice & friendship.” After addressing Cornplanter’s many concerns, Washington then ends his letter with an ominous warning that echoes today: “If any man brings you evil reports of the intentions of the United States, mark that man as your enemy, for he will mean to deceive you, and lead you into trouble. The United States will be true & faithful to their engagements.”

Washington then had a beautiful gift commissioned to present to Cornplanter in 1792, both peace-pipe and tomahawk. Sadly, peace and prosperity wouldn’t outlive the two leaders. Multiple rewritings of established treaties seized long-established Seneca homelands, with Cornplanter’s own historic home and lands submerged when the Kinzua Dam was built in 1960 - flooding over ten thousand acres of Seneca lands, entire communities and ancient burial grounds included.

It is amazing that Cornplanter’s peace pipe-tomahawk survived at all. Disillusioned by the damage done to his people by European society and America’s ravenous hunger for more land, Cornplanter destroyed most gifts given to him by Washington and other dignitaries, retreating to his lands to breed horses until his death in 1836. In 1850, the New York State Museum in Albany obtained Cornplanter’s peace pipe-tomahawk, and there it was thought to remain.

In 1947, however, Cornplanter’s peace pipe-tomahawk was stolen from a locked display case, and not reported missing until 1950. The trail goes cold from there - over seven different owners buying and selling this piece of Native and American history for thousands, then tens of thousands, of dollars. For 70 years, Cornplanter’s peace pipetomahawk passed between private collections. Until 2018, when an anonymous collector in Portland, Oregon, contacted the New York State Museum, via a lawyer.

The Seneca Nation of Indians immediately engaged to bring their history home, and the New York State Museum graciously arranged for the return of Cornplanter’s peace pipe-tomahawk. Finally a small but significant piece of Native and United States history is back where it always belonged.

All Americans are welcome to visit the Seneca-Iroquois National Museum, to see Cornplanter’s peace pipe-tomahawk, and learn about the history of the Seneca and Iroquois, as well as their present and future.

Clare Mark is the highest elevation in Cattaraugus County

The highest point in Cattaraugus County is Clare Mark, at 2,430 feet.  This mount, in the Town of Allegany off Chipmunk Road, is privately owned, and does not have public access for hiking.  Nearby attractions are Rock City Park and Allegany State Park.