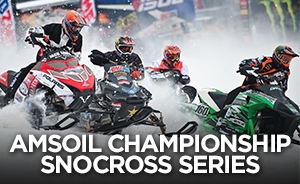 The twists, turns, thrills, and high speeds in the snow returns to Seneca Allegany Resort & Casino on Feb. 5 and 6 with AMSOIL Championship Snocross. The region’s newest winter tradition promises to provide fun for the whole family during a two-day, nationally-televised event that, last year, saw tens of thousands of fans descend upon the foot of the Allegheny Mountains for nonstop, heart-pumping, action-packed races with the world’s best snowmobile athletes.

Tickets for the event make a great holiday gift and are on sale now online at www.isocracing.com and at the Logo Shop inside Seneca Allegany Resort & Casino. Advance ticket prices are $25 for Friday, $25 for Saturday or a value-priced $30 all-weekend pass. A special four-pack of weekend passes is available online for a discounted price of $100. Admission is FREE for children ages six and younger.  Buys tickets online to save $10.

Crews with International Series of Champions (ISOC) Racing will once again turn one million gallons of water into snow over a football-field-sized plot of land outside Seneca Allegany Resort & Casino. This year, the race site will be presented in a new location, directly west of the casino, on the right-hand side of the main road leading to the hotel parking ramp. The race course will include wicked twists and giant ramps that will send vehicles flying dozens of feet into the air.

More than 200 of the top snowmobile racers from North America and nearly a dozen countries worldwide will face off in a full-throttle, action-packed series of races that combine big-air jumps and competitive racing. The weekend is also one of eight nationally-televised events on CBS Sports Network for the 2015 season, with new technology added to the production this year for instant replay features. The races also will be streamed live on U-Stream for online viewing.

Bleachers set up around the track can accommodate thousands of fans, and bright lights will illuminate the track during the evening hours on Friday and Saturday, when the main events take place and are taped for television. A new Family Zone will be outdoors this year, which will include a small-scale “120” snowmobile to test drive. Various vendors, including food and beverage, will also be on site.

Indoors nearby at the Seneca Allegany Events Center, fans will have the chance to interact with racers and get autographs. Snowmobile gear will be on sale, and the popular Traxxas Try Me Track will return with a course filled with remote-controlled miniature trucks.

Approximately 50 practice, qualifying, and final races will take place each day, including 22 races during both the Friday and Saturday night main events. As many as 15 vehicles will be on the track during a race, and individual races are broken down by age, gender and snowmobile type.

Schubitzke considers the region a “hotbed” for snowmobile enthusiasts, and there are nearly 20,000 registered snowmobiles in Erie, Niagara, Chautauqua, Cattaraugus and Allegany counties combined. For the entire state of New York alone, snowmobiling represents a $1 billion industry. In response to the industry’s growth and popularity, Seneca Gaming Corporation and the Seneca Nation of Indians recently provided a $66,850 sponsorship to Snow Bounders, Inc., a local snowmobile association, for the construction and maintenance of a new 1.5-mile snowmobile trail that connects Seneca Allegany Casino & Hotel to 90 miles of existing trails in nearby Allegany State Park. Thanks to that addition, fans can come to the weekend events on their snowmobiles. Otherwise, plenty of parking will be available, as well as shuttles from nearby attractions in Salamanca.

What: Round Five/Races Nine and Ten of 2014-‘15 AMSOIL Championship Snocross

Times: Gates open at noon on Friday, 8 a.m. on Saturday

For more information on this event please visit http://snocross.com/us-air-force-snocross-national/