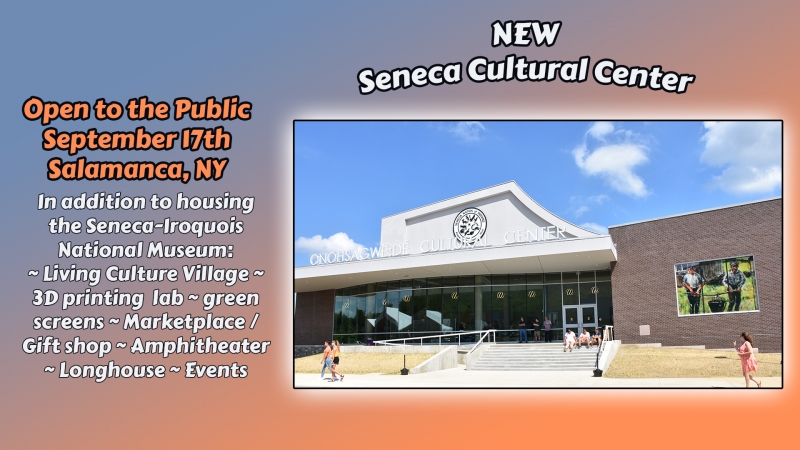 Salamanca, New York:  The Seneca Nation of Indians (Onon:dowa’ga:’) proudly announce the opening of the new Seneca-Iroquois National Museum. The impressive 33,000 square-foot facility cost $18 million and will celebrate Seneca and Native history while also focusing on the future.

“Beyond sharing our culture, the new museum is about preserving.” explains Todd Gates, President of the Seneca Nation. “We have many precious artifacts that could not be displayed or even properly cared for, so the new facility is state of the art and overdue. For society at large, loss of identity is major problem. I’m fortunate it’s happening under my watch, but this has been an ongoing need for decades.”

The new museum and cultural center has been millennia in the making. The Seneca hold a unique place in North American and world history. Known as “The Keepers of the Western Door” for being the western-most among the six nations of the Iroquois Confederacy, the Seneca are a matriarchal society that has participated in what is accepted as the first modern democracy in the Western hemisphere since 1100 A.D. The Iroquois, or Haudenosaunee, still regularly convene to make major decisions, voting democratically on issues that impact all Native members. Further, the Seneca never surrendered, instead reaching treaties with European settlers, including the new United States of America in 1784. The fact that the Seneca still thrive on their ancient homelands is crucial. Yet many sacred lands have been taken by the United States, even as recently as the 1960s to build the Kinzua Dam in northwestern Pennsylvania. Therefore, the new museum and cultural center are both a celebration of the past and a cornerstone for the future of the Seneca and all Americans.

“When we built the first museum in 1977, we realized it was too small after only a month. Our culture can’t be contained in a museum.” offers Stephen Gordon, a Seneca Nation Council Member, referring to the modest building that housed displays and regular educational programs, but couldn’t possibly preserve rare artifacts or be expanded. “We’re in a revival stage. Back in 1964 and the very first notion of a national museum, that’s when the Kinzua Dam flooded our ancestral lands. We knew our culture was under threat, with thousands of Seneca displaced and over 10,000 acres seized. Somehow our ancestors got us here. That is why our museum is now considered a living cultural center.”

The new facility is truly a sight to behold. Inspired by Native lore and images, including Seneca clan symbols on the exterior, it is designed to guide and immerse visitors throughout. This isn’t another museum to merely walk through and solely witness. The experience is everything.

The 33,000 square-foot building has hundreds of items on display that will be regularly updated. 400 people can pack the new amphitheater outback for educational programs, including Native lectures, cultural presentations, plays for children, even concerts. The gift shop has been expanded, and now offers online ordering of exclusive Native-made and -inspired art and other keepsakes at www.senecamuseum.org.

While thousands of Natives and non-Natives regularly attend the annual Seneca Pow-Wow and Heritage Days, such events will become more frequent and accessible to local schools, tourists, as well as the tens of thousands of gamers at Seneca Casinos in Salamanca and Niagara Falls. Critically, 95% of Seneca artifacts have never been displayed due to their fragile nature, and a state of the art 3-D printing lab will allow delicate, irreplaceable, items to be scanned and duplicated for further study. To properly document and display these rare relics, the Seneca-Iroquois National Museum has hired a professional archivist.
“This is a dream come true.” says Seneca-Iroquois National Museum Director David George-Shongo Jr. “For decades we have done all we could with what we had. After dreaming of a new facility for decades, then finally designing it, engaging with other museums and Cornell University to make our experience truly unique, our museum’s opening feels like an end. But it’s really only the beginning.”

Given ongoing environmental concerns across America where Natives have taken the lead – Kinzua Dam, the Dakota Access Pipeline and Standing Rock Sioux, the future of The Great Lakes, and new pollutants from fracking waste now threatening the Allegheny River, the Seneca’s sacred “Beautiful Waters” – education and engagement have never been so important.

Maurice John, Sr., Treasurer of the Seneca Nation and one of the first champions of a national museum, explains this moment in time. “This is much more than a new building on our territory. It’s going to give the next generation the opportunity to continue and update our culture. We have our past well documented. But we have changed compared to our parents’ generation. We are opening the circle. We have always been here, and it is time for us to be seen. No one inherits the Earth. We rent it from our children.”

Drone footage shot by students of the new museum is available for viewing at www.youtube.com/watch?v=lxyMBigD7CA
For more information about the Seneca-Iroquois National Museum, and to order Native-made art and keepsakes, please visit www.senecamuseum.org.

Most Residents are Amish in the Town of Leon

There are approximately 1,380 residents in Leon with the Amish Community comprising about 76% of that number. The Old Order Amish settled in Leon in 1949. They do not believe in the modern conveniences. They have no electricity in their homes + travel by horse and buggy.

If you are looking for someplace interesting to go, try the Leon area. It is right in the heart of Amish Country.