Little Rock City is a local landmark of geologic interest. Located at 42° 12’ 31” N, 78° 42’ 31” W, Little Rock City is located north of Rock City State Forest and is accessible in the spring, summer, and fall by vehicle, and during the winter by snowmobile. If you are traveling to the site by vehicle, the roads that you drive on were created during President Roosevelt’s CCC (Civilian Conservation Corps) plan to produce jobs for those who were unemployed and in need of work.

Little Rock City is unique due to the large rock formations that are visible and scattered throughout the surrounding area. The formation of the geologic site has been very controversial due to the fact that it was never affected by glaciers during the last ice age 20,000 years ago, a fact unknown to many people. If Little Rock City had in fact been affected by glaciers, the site we see today would most likely not be present due to destruction by the large ice sheets.

Today, we know that Little Rock City was not formed by glaciers, but actually formed through mountain building events known as orogenies. As sediment from surrounding areas was deposited over Rock City State Forest, the base for Little Rock City was formed. As hundreds of years passed, gravity erosion of the landscape began to separate non-resistant rock layers from those which were highly resistant, leaving us with the large boulders that are present today.

People travel to Little Rock City for many different recreational activities. Some things that you may do while at the site include camping, hiking, picnics, biking, and rock climbing/bouldering… the possibilities seem endless. The best part though is that it is free to come and do whatever you would like! Although it is still a state forest so four wheeling and other motorized recreational vehicles are prohibited and use can result in fines.

Map of the area

Click the following to view a map of the area and site marker:

Big rock formations like this pictured above are visible throughout the entire area, all telling their own story about geologic activities that have taken place. 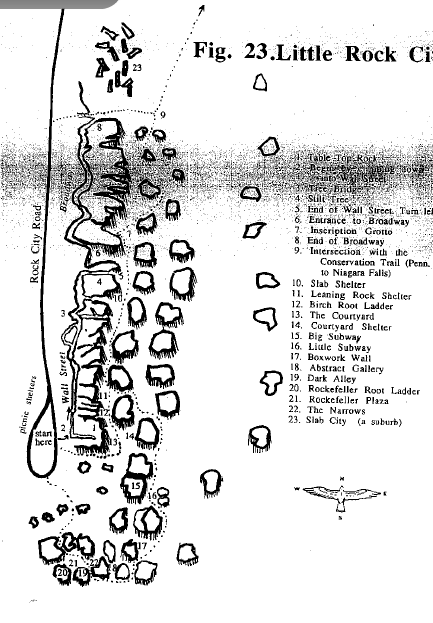 The figure above shows the layout of little rock city at its present location if you were to visit it today. 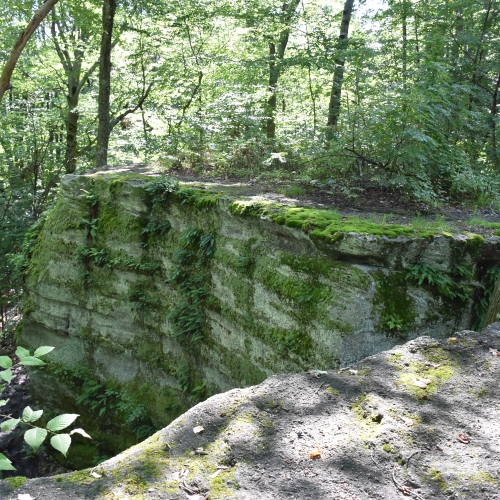 Little Rock City is categorized in