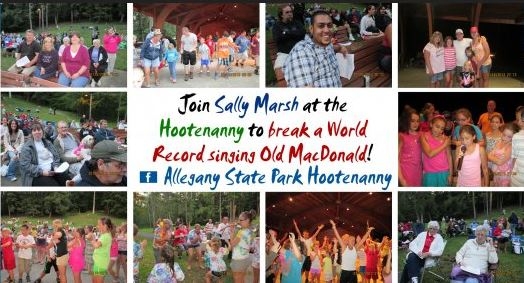 Fresh off the Press!  Sally Marsh's Hootenanny sets World Record for most people singing "Old MacDonald" at one time.  Sally Marsh has been holding weekly hootenannies for 42 years now at Allegany State Park.  Former employee there, Sally has been inviting one and all to meet up on Thursdays on the Quaker side of the park.

A family friendly event, "Old MacDonald" has always been a big part of the hootenanny, with kids wanting to sing the song and Sally encouraging them to act out different animals on stage at the microphone.  So after watching this happen week after week, and slightly only kidding at first, the idea to set a Guinness Book World Record was in motion.

After weeks of practicing, a date was set and the word was spread that August 17th was going to be the official date to try and break the record of 332 persons singing.  375 people showed up, welcomed with T-Shirts to commerate the event, and the singing began.

There was an official team of volunteers who registered the event and photographed each person, filled out the paperwork and videotaped the event, all verification needed to be "official".  After all was said and done......the record had been broken!  Sally's Hootenanny officially had the title of Most Persons singing Old MacDonald at 356 (some volunteers could not be counted) and this can be found in the newest version of the Guinness Book of World Records.

But don't worry, Sally isn't stopping here, and in fact has expanded.  She had a Hootenanny on Columbus Day Weekend and a Christmas one.  So, next time you're looking for fame or just a good time, look up Allegany State Park Hootenanny Facebook page (https://www.facebook.com/AlleganyStateParkHootenanny) and be there for the next one!