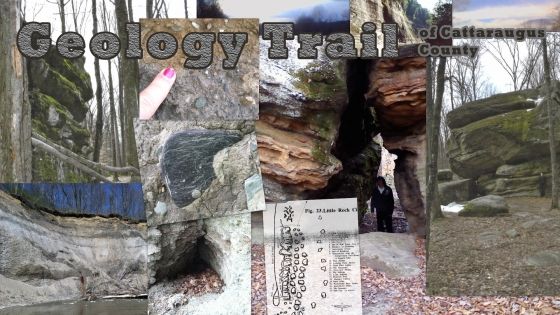 Many people are surprised to hear of the natural wonders that can be found less than an hour south of the great Niagara Falls in the quiet, rural Cattaraugus County. Rock cities, ancient glacial valleys, vertical-cliffed gorges, and continental divides are just a few of the sights one may see on a day trip through the area.

Entirely situated on the western flank of the Allegheny Plateau, Cattaraugus County sits at an average elevation of about 1800 feet above sea level. Ironically, most of the exposed bedrock one will encounter was deposited in a calm and quiet sea nearly 300,000 years ago during the Devonian Period.

Cattaraugus County boasts a top ski resort destination in the eastern U.S. due to some relatively high-relief. The Allegheny Plateau is deeply dissected mainly due to river flow since the retreat of the Devonian sea. However, the most recent Ice Age (65,000-10,000 years ago) has also played a key role in the present shape of the land.

In September 2011 an advanced class of high school Geology students from Cattaraugus-Little Valley High School began research and observations of several sites of geologic interest in Cattaraugus County. Each site will open a new door to the rich geologic history of Cattaraugus County, as well as western New York State.

The following is a small portion of the students’ research. It should be noted that the students are high school-age and their work was edited by their Geology teacher. Most information is accurate, but may be slightly incomplete, as this is a work in progress.

The Cattaraugus County Geology Trail is great for the following activity: