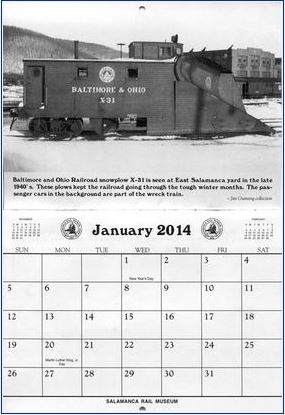 The new 2014 Salamanca Rail Museum Calendar is now available!The Salamanca Rail Museum is a fully restored passenger depot that exhibits nostalgic railroad pieces with an emphasis on the three railroads that served the region; the Erie, the Baltimore and Ohio (BR&P), and the Pennsylvania Railroads.

The latest calendar is now available!   The front of the calendar displays a photograph of the Salamanca station built by the Erie Railroad 110 years ago.  The different months show past photos of the three railroads, dating back to as early as the 1890's.

The calendar will bring you through a walk down memory lane, showing perhaps a little known developmental past for Western New York.  In fact, railroads played a pivotal role in developing the town of Salamanca.  The museum has been putting out the calendar since 1981 and it is one of the main ways it raises money.  Admission is free to this museum, but donations are appreciated.

Cost of the calendar is just $5! With it being mailed directly to you!  Interested parties can send a check or money order to the Salamanca Rail Museum, 170 Main St., Salamanca, NY 14779 or by calling 945-3133.